Housing Works is teaming with dozens of other AIDS groups to demand that the Obama administration fulfill its commitment to people around the world who need immediate access to HIV medications. Obama has flatlined funding and millions will die because of it.

Comments Off on “Wait to Die” Obama Protest at DNC Fundraiser

Six Years Ago Today – We Fled to Canada for Freedom

Frank Jump, left, kisses his partner Vincenzo Aiosa as they hold their marriage license at city hall in Toronto, Friday Feb. 13, 2004. Jump and Aiosa were one of seven couples from the United States who came to Toronto to get marriage licenses. (AP Photo/CP, Adrian Wyld)

Rotten to the core © Vincenzo Aiosa

I think it is really Rotten that we are still not allowed to get married in New York State- thanks to a bunch of Republican Assholes in Albany. Also adding to the list of assholes are the Democrats who voted against the bill included Sens. Joseph Addabbo, Shirley Huntley, George Onorato and Hiram Monserrate of Queens, Carl Kruger of Brooklyn, Ruben Diaz Sr. of the Bronx, Darrel Aubertine of the North Country, and William Stachowski of the Buffalo area. – Vincenzo Aiosa – Rantourage

Thank you Equal Marriage Canada, The Great City and People of Toronto, The Honorable Justice Harvey Brownstone and his partner Marty, and Brendan Fay and Jesús Lebrón!

Posted on December 17, 2009 | Comments Off on Go Vegan, Save The Cows – Seattle Activist – Capitol Hill District

We arrived in Seattle this summer during an unusual heat wave. It reached close to 100ºF that day and was close to 116ºF later that week in Portland, OR. Who could eat meat?

Comments Off on Go Vegan, Save The Cows – Seattle Activist – Capitol Hill District 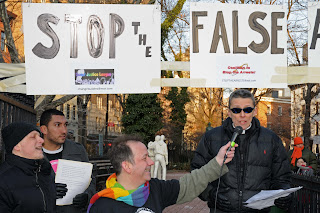 STOP the FALSE ARRESTS
SHERIDAN SQUARE RALLY II
Saturday June 13, 2009 1pm
7th Ave. & Christopher St.
Stonewall 40 – False Arrests continue 40 years later.
Join us in calling on DA Morgenthau to continue and complete the thorough investigation into these false arrests that he promised the LGBTQ community and leading politicians in a meeting in his office on March 6, 2009.

CHRISTINE QUINN: BEHIND THE SMILE

This is the last piece I had input on from my just departed dearly beloved Rodger McFarlane, who read and critiqued everything I have ever written. He loved it, as he loved me. And I pass it on to you, to the world, in memory of him, who encouraged me so and believed in me so, as I did him.

May he be at peace.

Larry Kramer has been writing his The American People since 1978. His first draft, just completed, is some 4000 pages. He and his editor are now rolling up their sleeves. – Huffington Post

Posted on April 23, 2009 | Comments Off on Weathering the Storm (Response to NOM Gathering Storm)

Comments Off on Weathering the Storm (Response to NOM Gathering Storm)

THE POWER IS YOURS because you are THE POWER. JOIN THE POWER in holding political leaders accountable to support equality for LGBT people, not on some arbitrary and convenient schedule, but right now.

THE POWER works to unleash every individual’s power to engage in direct political action that creates change in the cause of LGBT civil rights. We operate under the premise that every individual can make a difference, given the tools and information to do so. By tailoring pointed actions that everyone can do even with the busiest of schedules, The Power mobilizes large numbers of people to apply sustained pressure on leaders to advance the cause of LGBT equality.

More than anything we believe Now Is Our Time.  – Jeffrey Campagna

More from the ACT UP Archive

Lea Delaria & Frank Jump (co- emcees) at an Albany LGBT event in 1988 - Tom Stoddard in background to the left.

Eleanor Cooper, who began her lesbian activism in the early 1970s, was a leader in the passage of the New York City gay and lesbian rights bill in 1986, and managed to stay active through most of her last 13 years in a nursing home, died of complications from a series of strokes and sepsis on December 6. She was 68. – Andy Humm

When I went to Philadelphia in 1978 as representative of Queens College LGBT youth to help plan the first Lesbian and Gay March 1979, I was wandering around the Friends Meeting House  during orientation where our national committees was hosted and, not by accident wandered in with the womens’ caucus. The men’s groups seemed fractured to me and I was tired of getting hit up on by NAMBLA members and getting ignored by other members of the youth organizations – so the womens’ caucus seemed like a safe haven. After a few minutes of “checking in” we sat around holding hands and sharing how we felt “in the here and now.” I had very long hair, I was very slim and wore flowery Huckapoo shirts and platform shoes. I looked a bit like the Cher doll with Sonny’s clothes. Suddenly a woman who was smiling at me followed her eyes down my torso to my crotch and screamed with a blood-curdling scream “There’s a man in here.” Naturally I turned around to see who it was. Within seconds I was thrown out of the room bodily.  Eleanor Cooper sternly came to my rescue. “What in the world were you thinking?” she said. “Don’t you know about respecting “womens’ space?”  Womens’ what? I asked.

Eleanor surpressed a chuckle and informed me in a very motherly way that women are around men all the time and when they have the opportunity to be with themselves, would prefer if men respected “their space” and left them alone. I assured her that I was only there because I felt comfortable with them and explained my  discomfort around men I did not know. She brought me back in and explain my situation and I apologized to the group. Over the course of the weekend, I was introduced by Eleanor to many wonderful women like Joyce Hunter & Betty Santoro. I will miss Eleanor.

Anne Pope: Frank Jump and I have been friends – and sometimes collaborators – since 1988. When I first thought about doing a StoryCorps session, he was the first person I wanted to interview.

Everybody’s story matters. Every life counts. Help us reach out to record our history, hopes, and common humanity—and illuminate the true character of this nation. StoryCorps.net

Remembrance of Our Dead – The War With AIDS Isn’t Over

Memorial Day has always been a bittersweet holiday for me. I don’t know many veterans since many of my friends are gay or lesbian and cannot openly serve in the military. The only legitimate and significant war I have personally experienced been the War Against AIDS. From this day forward, Memorial Day will be a day I will remember those I’ve lost in this war and I invite everyone else to join me.

Sitting and trying to think of the countless people I have encountered in my life who have died from this still stigmatizing disease is a daunting task. Above are some of the names of friends and acquaintances who have touched our lives (Vincenzo and myself) in some way. [I’ve gotten up out of bed and updated the list twice already. I don’t think this is a realistic task for one day.]

This April I have been HIV+ for 24 years – half of my life. Through the years I have begun to have days when I think of the disease only perhaps once or twice a day, but not a single day goes by that I’m not reminded of my mortality at least once – probably due to my adherence to my meds. Then I remember those I’ve lost. I encourage people to share names of their loved ones who have died of AIDS- reminding America of the indignities and indifference they had experienced.

My niece Rosario Dawson has campaigned for the VOTO LATINO group she co-founded as well as for P-FLAG.

Back in the beginning of the AIDS crisis, Buckley suggested all HIV+ Americans get visibly tattooed to warn and protect the public. Very soon after this Machiavellian suggestion, Buckley had a biopsy sent to a laboratory where an AIDS activist from ACT-UP was a technician. When becoming aware it was Buckley’s biopsy, the diagnosis of “Kaposi Sarcoma” was sent out. To Buckley’s horror, that he may have contracted an AIDS related cancer, he was re-biopsied and coincidentally, the same lab tech received the specimen and the same diagnosis was sent. Biopsy Terrorism. Ah. Sweet Revenge. Good riddance to bad karma.

Buckley Calls Gore Vidal A “Queer” on Live TV 1968 – But during one of the TV debates at the 1968 Democrat Convention between the highly erudite William F. Buckley, Jr. and the celebrated novelist Gore Vidal, Buckley called Gore a “goddamn queer” and threatened to beat him up. – Sweetness & Light

“Now listen, you queer- stop calling me a crypto-Nazi, or I’ll sock you in your goddamn face and you’ll stay plastered.”—To Gore Vidal, 1968  Ooooh! I’m sure Gore was just shakin’ in his go-go boots!

Katherine McInnis, photographer/teacher who was harrassed by MTA police for using her camera near the Atlantic Yards footprint, joined the fray on Sunday in support of our First Amendment rights. Read more about it in detail at Brit in Brooklyn Blog. Amazing how we live in a country where owning a gun is considered an inalienable right, but documenting our time with a camera is considered subversive. Adrian caught me in his pic here. Here are some more pics from the “action” plus some of my distractions.